It’s a Chai Birthday Year at the South Hills JCC

On January 29, we will mark the 18th “birthday” of the JCC in the South Hills.  This milestone is traditionally referred to as a “chai” or life event, because the Hebrew letters that spell chai correspond to the number 18.

It’s been a great 18 years of preschool, summer camps, fitness, recreation, swimming and most important, community building, and we’re looking forward to celebrating many more.

Like most any “chai” event, it’s also an opportunity to recall how this all came about.

The South Hills JCC facility took years to come to fruition. Originally, South Hills programs of the JCC were held in the former ward school in Mount Lebanon starting in the early 1990s. Ground was broken in June 1997 for the Henry Kaufmann Building in Scott Township, built on a portion of the Kane Hospital site. The building was dedicated in 1999.

Architect Daniel Rothschild of Rothschild Doyno Collaborative designed a building with symbolic forms and details that would relate to people on many levels. “The front wall of the building…is symbolic of an unrolled Torah scroll, exposing the richness of Torah to all who visit the building,” he wrote in Architectural Symbolism at the South Hills Jewish Community Center.

The two wings that project forward, each crowned with a curved, barrel-vaulted roof, resemble the two arched, stone tablet forms of the Ten Commandments. Inside, the circular lobby is formed by 12 exposed steel columns that lean slightly inward at the top, referencing a tent, which is a strong image that occurs throughout Judiasm. The 12 columns are reinforced by x-shaped bracing; each crossing is inlaid with a round medallion of colored stained glass, representing the 12 tribes of Israel.

I have been thinking about my own relationship to the JCC in the South Hills and what it has meant to me, my family and the community.

My son Ben was born in January 1993.  As both my wife Nancy and I work, we began to research child care possibilities and learned that the JCC had opened an Early Childhood Development Center in the rented space they were then operating out of on Moffett Street, across from Jefferson School in Mt. Lebanon.  They had just begun to provide early childhood services and our son was the second infant enrolled.

We became a JCC family and had the great pleasure of meeting other ECDC parents, who became our friends and now, over twenty years later, comprise the bulk of our social network.

Our kids went to JCC day camp and on to EKC over time, as campers and then counselors.  My own role at the JCC deepened as I was invited to participate on what was then called the South Hills Advisory Committee.  It was there that discussions of building a permanent home for the JCC first occurred for me. 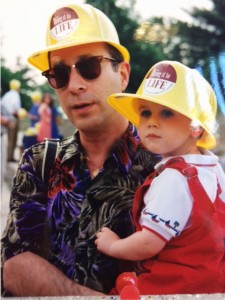 Dan with son Eli at 1999 groundbreaking

My wife and I had the enormous pleasure of being witnesses to the ground breaking for the facility.  With the construction of the new building, my role changed and I was invited to join the Board of Directors of the JCC, a position that I served for 10 years. In 2008, I became Branch Director.

So my journey with the JCC has now lasted more than a third of my life, going on 25 years.  It has given me and my family joy, swim lessons, camping, personal training, friends, deepened involvement in Jewish community, CIT trips to Israel for both of my sons, a career, and a position in the community where I can help encourage and support others on their own JCC journeys.

Like so many others who move to a new community, the JCC provided Jewish connections that have lasted for decades and continue today.  Every day I have the pleasure of seeing our ECDC children growing up; of seniors staying fit in mind and body socializing in our lobby; of teens coming together for BBYO or to work out and play some basketball.  In my diverse professional life, I never imagined my journey would take me here, but I couldn’t be more grateful that it did.

Please join us to celebrate with a birthday party January 29 from 2-4 pm at the JCC South Hills.