In observance of Domestic Violence Awareness Month, the JCC has partnered with Southwest PA Says No More and their new partnership with Verizon to support the HopeLine Program, which collects no-longer-used wireless phones, batteries, chargers and accessories in any condition, from any service provider, and turns them into support for domestic violence awareness and prevention organizations.

This ties directly with the JCC’s tikkun olam (repair the world) agenda, which focuses on the role that men of all ages can play in reducing domestic violence.

Verizon, in a statement, describes how it can be a part of the solution:

Domestic violence is a national problem that impacts our communities, neighbors, coworkers, friends and family members. We believe our network and technologies – and our people – can be a part of the solution.

We are inspired by William Gay’s courage. The JCC would like you to continue to take action against domestic violence by asking members to donate no-longer-used wireless phones, batteries, chargers and accessories from any service provider. Since October 2001, the stats below reflect the impact of the HopeLine Program. 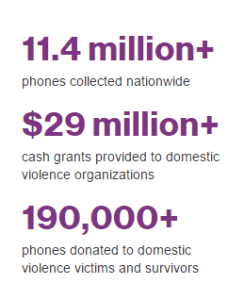 Now, its our turn to pitch in. Collection boxes will be posted at the Centerfit, Darlington and Robinson entrances of the Squirrel Hill JCC throughout the month of October.

Healthy and Fit | Tip of the Week ...
read more

It's a special time of year, a time to "Start Fresh." To help you prepare, we put together an infographic -- kind of a "fresh" take with interesting ...
read more