“In 2003 I had the vision to bring fresh seasonal and local food to Regent Square,” Goldstein writes on the restaurant’s website. “The quality and tastiness of the food were as important to me as creating a friendly neighborhood cafe that would bring the community together.”

Thirteen years and counting, Square Café, her “crazy pipe dream,” as she puts it, is a thriving neighborhood gathering place, and the food (they serve breakfast and lunch) is really good.

“I like to hang out and talk to people,” she says as we sit together at a formica-topped table that could have come straight from a 1960s suburban kitchen. Goldstein describes how she started: After a five year search, she found her spot on Braddock Avenue, “hired a great chef and opened in six weeks.”

This local institution keeps as local as possible — using locally sourced food and running a food truck for locally owned Uncle Charley’s Sausage and partnering with the producers of King’s Pearl Cheese, with the father-son team making the cheese in the Square Café kitchen every week.

The menu is changed spring and fall and has options for vegetarian, vegan and gluten-free guests. Goldstein’s current favorite is the “Quinoa Lima Bean Saute.”

Square Café provides more than great local food to fulfill its role as a community asset. Goldstein thinks local—from the monthly art exhibits on the walls by local artists (seen by as many as 12,000 customers/month), to having her printing and merchandise made by local artisans. She also has created a supportive workplace, in which her 30-some employees have been receiving health insurance even before Health Care Reform. Steven Krall, a cartoonist/wait-staff, designs and creates an inspirational blackboard every month.

Some of Goldstein’s modeling for community-building came from her years employed by the JCC, where she worked in the after-school program and as a counselor at J&R Day Camp.

As Goldstein lists these, a young mom eating an early lunch with her son leans over and reminds Goldstein of her recent donation to the Carriage House PTO. “She is a wonderful community member,” said Marisa Nero, while her son Parker showed Goldstein his truck. 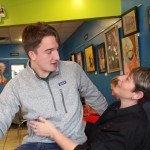 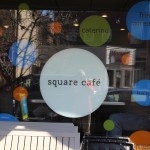 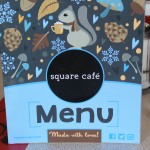 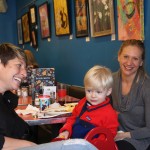 Several times a week, parents call Goldstein over to their tables for their children to ask about the logo: “Why is it Square Café if it’s in a circle?” Goldstein paraphrases with a big smile.

Goldstein’s son, Daniel, a student at the University of Pittsburgh, stops at her table to say hello. Other customers greet her on their way in and out of the restaurant. Everybody seems to know her!

At Square Café, “We cook with love and we serve with love,” Goldstein says. “I just love what I do.”

Healthy and Sweet - A Recipe for Rosh Hashanah

Apples & Honey Quinoa Salad This salad is an easy, fun, and healthy way to enjoy apples a...
read more

I am on an Anxiety Roller Coaster

June 2, 2020 Once again, far too quickly, frequently and painfully, the curtains covering systemic racism have been pulled back an...
read more