Home » Blog » Adults » Scenes from History: Koerner and the Levinsons

Scenes from History: Koerner and the Levinsons

Pittsburgh’s 200th anniversary celebration has me thinking about the JCC’s part in Pittsburgh’s story, and the portraits I recently stumbled upon of James and Samuel Levinson, tucked away in a JCC office, resonated with me. The subjects’ outsized proportions, crossed arms and straight-on gaze are characteristic of all ‘master-of-industry’ style images. There are, however, captivating Pittsburgh narratives beyond the surface.

James Levinson (1863-1917), a first generation American and James and Rachel Levinson Day Camp’s namesake, owned a scrap metal yard on Pride Street in the Hill District during the early twentieth century. A common and lucrative profession, particularly for Jewish immigrants, selling metal scraps was none-the-less considered dangerous. It also carried a reputation for being unsavory in a Dickensian kind of way; think little kids rummaging around trash heaps looking for small scraps of rusty metal to sell. The scrap metal business made it possible for his sons, Sam and Abe, to transition from scraps to a steel fabrication plant, which both portraits distinguish. During the 1950s Levinson Steel was the 11th largest steel company in the country. 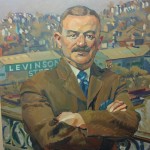 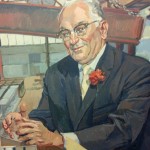 Henry Koerner (1915-1991), renowned illustrator and painter of the Levinson portraits, moved from New York to Pittsburgh at around this same time for a teaching gig at Chatham College. Koerner, originally from Austria, fled to New York in the 1930s to escape Hitler. It wasn’t until he returned to Europe in the 1940s as a GI that he learned his family had died in a concentration camp. Notably, while in Europe serving in the Army, he illustrated courtroom proceedings during the Nuremberg Trials. By the time Koerner moved to Pittsburgh in 1952, he was already well known in artistic circles, but his fame escalated when he began painting covers for Time Magazine. He is credited with illustrating 50 covers between 1955–1967, including images of Barbra Streisand, Maria Callas, John F. Kennedy and Paul Getty. While Time brought him national acclaim, his affinity was for large-scale allegorical imagery with Pittsburgh as a backdrop. Many of his best paintings use the magical realism style he was known for to convey Pittsburgh’s bridges, hilly terrain and rivers. 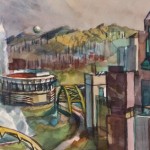 I don’t know what forces brought Koerner and the Levinsons together, but the Levinson portraits’ dates indicate Koerner was in the throes of the Time covers when he completed these. Whatever sparked their connection, it’s incredible that the JCC has such remarkable depictions of the Levinson family members who are so close its soul.

Healthy and Sweet - A Recipe for Rosh Hashanah

Apples & Honey Quinoa Salad This salad is an easy, fun, and healthy way to enjoy apples a...
read more

I am on an Anxiety Roller Coaster

June 2, 2020 Once again, far too quickly, frequently and painfully, the curtains covering systemic racism have been pulled back an...
read more

As we self-quarantine during this pandemic, many of us are re-focusing on domestic arts, especially baking. This shabbat, why not try your hand at bak...
read more