Home » Blog » Adults » May I tell you of PFC Nathan Hilu?

May I tell you of PFC Nathan Hilu?

Posted by Melissa Hiller, Director, American Jewish Museum at the JCC on January 21, 2016

Turns out that 90 year-old artist Nathan Hilu, based in New York’s Lower East Side, has Pittsburgh roots. No Hilus remain in the area, however, so the name is unlikely to have a ring of familiarity. 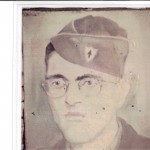 Hilu, the subject of American Jewish Museum’s upcoming March exhibition, is an enigmatic character who draws ferociously with any medium he can get his hands on. His writing (drawn memoirs) and drawing are often made with thick Sharpie pens or crayons on cardboard used by drycleaners to keep laundered shirts stiff. He protects the paper by wrapping it in clear packing tape. He particularly focuses on portraying rabbis, brides, his interpretation of biblical scenes and his memories of being a security guard in Germany during the Nuremburg Trials. He is considered to be an outsider artist because he is self-taught and obsessively fixates on topics that interest him. He remains especially engrossed with his role as a humble, inexperienced 18 year-old Private First Class (PFC) who guarded over the most notorious and dangerous Nazis. In addition to being struck by the quality and intensity of Hilu’s work and his complicated persona, I was drawn to this project because of the opportunity to collaborate with Professor Rachel Kranson of the University of Pittsburgh’s Department of Religious Studies and Lauren Bairnsfather of the Holocaust Center of Greater Pittsburgh. 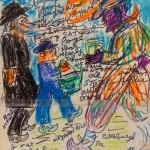 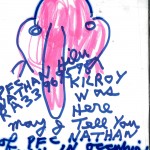 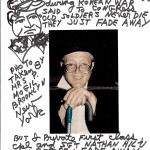 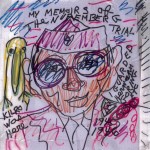 This project was originally organized by Laura Kruger from the Hebrew Union College Museum. When she told me that Hilu, a Syrian Jew, is from Pittsburgh, but that she didn’t know much about his childhood, I did some sleuthing to fill in some history and contextualize his childhood. I was hoping to find some photos and Hilu’s high school graduation photograph. I didn’t strike gold, but I found some helpful information. The family lived in the Hill District on Davenport Way. They lived a few blocks from the Hill House, and Hilu affirms in his memoir (pictured) that he told General Patton he went to the Hill House, the Hebrew Institute and Schenley High School. The Hilus belonged to Congregation Keser Torah, an Orthodox synagogue founded by Russian Jews originally from Volinia. Pittsburgh’s Hill had no Sephardic Jewish synagogue, so the Hilus practiced Ashkenazi Judaism. A younger brother, Sam, graduated with Andy Warhola in 1945 from Schenley. No record of Nathan’s graduation exists.  Leon Hilu, Nathan’s father, sold neck-ties door-to-door out of a suitcase.

As I plan discussions for Pitt students, what strikes a chord for me from this summary are the experiences Hilu had as a first-generation—probably poor—American, the oldest of five kids, living, adapting and coping in the Hill during the 1930s and 40s. Hilu, like all veterans, then lost his innocence and youth in the face of war’s atrocities. I am struck, however, that he has found such a powerful way to tell his stories, and I’m excited to share these stories with the public.