Our new Mission Statement tells the story of the JCC:

When will the cocoons become butterflies? Tatum, 4, and Piper, 3, are guided by their teacher Shardaya to observe, experiment and discuss this as part of a typical day in the JCC’s Early Childhood Development Center. 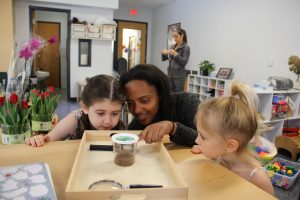 Exploring nature is just one aspect of the child-led learning that educators
nurture in our ECDC program—inspired by the practices developed in
Reggio Emilia, Italy, for the education of young children.
“We create an atmosphere in which every person—child, parent and educator—belongs and is essential; where everyone’s values are heard, all are accepted, diversity is celebrated and self-discovery is nurtured,” says Liza Baron, Edward and Rose Berman Director of ECDC.
Family engagement is essential to our school community. “Nurturing
collaborative partnerships with our families is at the heart of what we do,” Baron says. “We actively listen to and incorporate parents’ perspectives into how we think about teaching and learning.”
This year, ECDC was invited to join the Jewish Community Center Association (JCCA) Sheva Lab Communities initiative. As one of ten Sheva Lab Communities, ECDC is able to support the fundamental components of the school’s approach with the latest research on child development.
“We look forward to continuing our growth as a center that is focused on the best practices in early childhood learning,” Baron says, “ensuring that our children are prepared for success in elementary school and beyond.”

Summer camp is a special time, when lifelong friendships are formed and children, teens, counselors and staff connect and create community. 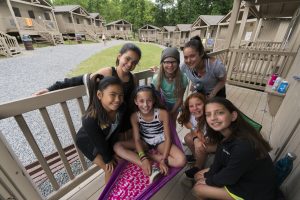 One major community building initiative: This summer, JCC camps (with
the exception of STEM camps) are going “screenfree” in order to help ensure that there are no artificial barriers to the formation of important summertime connections.
Summer is upon us and we’re so excited about the wonderful things happening in our camps. In addition to the traditional favorites, each
of our camps has added many new and exciting activities this year.

• 9 Square in the Air! A hot new camp game that is a combination of volleyball and 9 Square on the ground—played on land or in the water
• A new and expanded home for Karmiel at the Kove, including a fully-enclosed outdoor play area
• Brand new ropes course element, ready to engage and challenge our campers
• Expanded middot (values) program, welcoming community leaders to
show the campers how middot are put into action every day

• Ga-ga Pit for the popular game, which combines dodging, striking, running and jumping with the objective of being the last person standing
• Middot program in which campers and staff explore new ways to incorporate a Jewish value into daily activities
• Art Camp—with a focus on a different medium each week

Guaranteed for all: This summer is going to be great!

EACH DAY: Health and Wellness

Day in and day out, Jen Goldston is at the JCC. 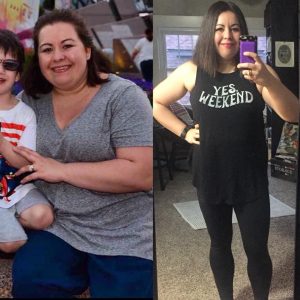 The mother of three is on a journey to be her best self through fitness and healthy behaviors—working with a
JCC personal trainer, taking a huge variety of group exercise, Spinning and HIIT classes, meeting with a JCC nutritionist. Through discipline and a near relentless honesty with
herself, Jen has come a long way in one year.
How did she get started? In an early post on her JCCPGH.org blog she wrote: “I wanted to stop shopping at stores that made me pay more simply because I took up more space. I wanted to set up a healthy foundation for my kids. Those were my highlight reel reasons, but the truth? The truth was that I was
disappearing from my own life…I wanted ownership over a body that I had not treated very well, and that body was just not having it.”
Jen’s journey has taken readers through her anxieties about working with a trainer, her intimidation at walking into her first Spinning class and taking a Group Power class, her struggles with making herself relax as an integral part of her training, and with accepting her limits and her self.
While an important part of her journey is learning that she is on a lifelong quest, Jen knows she has come a long way and says, “Often, the most brave thing we can do in a moment of perceived weakness, is say ‘I need your help’, and that is what will always hold the JCC apart and separate from other health facilities—their desire to create a space that is safe and effective for everyone.”
For those of you who are thinking about getting into a healthier routine, we encourage you to read Jen’s blog JensJourney. We think you’ll find it very inspiring!

THROUGH EVERY AGE: Fitness 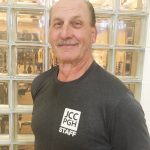 At age 71, John Koishal Jr. is still a lifter. He was never a 97-pound weakling but as an athletic 12-year-old, he was so inspired by the Charles Atlas ads at the back of comic books that he asked his dad for $79 to buy the advertised bodybuilding course. That was a lot of money in those days, so his dad made weights by layering cement into buckets that were welded to the ends of a rod.

Thus began Koishal’s lifelong avocation in weightlifting and physical fitness, continuing to this day with an inventiveness that he brings to his wildly popular weekly H.I.I.T. class at the South Hills.
“When I took over the class, there were just four people,” he says. “Now, the class has been moved to the gym to accommodate up to 19 or 20.” Participants in the class range in age from 24 to 86. “I’m an extrovert,” he says. “I see people and I say, ‘why aren’t you in my class?’ And I don’t take ‘no’ for an answer.”
Participants especially love the soundtracks Koishal puts together; maybe some doowop oldies or something more current like Chris Anderson’s The Last Night. “We get into a rhythm,” Koishal says.
“It’s a great workout,” said Larry Gastgeb, age 70, who has been recovering from knee and shoulder replacements. “It helps me feel good.”
While his current lifting isn’t quite up to his all-time high at age 26, when he benched 420 lbs., Koishal still routinely works with 60-65 lb. dumbbells, citing one of his mantras: “Rest is rust!”
Koishal, whose wife Peg is a longtime Front Desk staffer, joined the JCC in 2013 after he retired from a business career. In addition to teaching his class, he is a personal trainer. “I want to give to other people what I’ve learned through the years,” he says. “My knowledge is my gift to them.”

“I have been involved in politics and social action for a long time,” says Isabel Segel, 18, a senior at Allderdice High School and a lifelong JCC member whose passion for social justice is rooted in Jewish values. 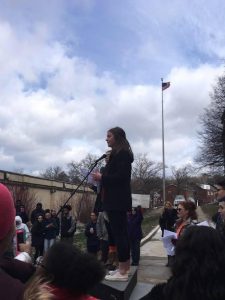 In March, Segel was one of 7 organizers of a 17-minute peaceful action at Allderdice, one of 3,000 schools involved in the National School Walkout protesting gun violence in response to the February school shooting Parkland, Florida.
In organizing the Allderdice walkout, Segel and a few friends worked to make sure that the organizing group was as inclusive as possible and successfully gained the
cooperation of the school administration.
Eight hundred students participated in the action, which focused on the message that students should not have to fear for their lives in school. They also recognized that “the vast majority of gun violence is outside schools,” she says.
Segel is co-chair of the gun violence task force for NFTY (National Federation of Temple Youth). She has lobbied Congressman Mike Doyle and Senator Pat Toomey in D.C. and will be interning for Senator Bob Casey’s reelection campaign. In the fall, she will attend Princeton University, where she plans to study economics, furthering her passion for policy-based social action and “taking these sentiments and methods of action forward.”

Help keep the JCC available to everybody.
donate.jccpgh.org/donate