The International Day of Youth Service, J-Serve, is meant for Jewish (and non Jewish)
teens from across each participating community to join together with other teens to volunteer at places within the community. The teens learn not only about ways to get involved, but also why it is a crucial aspect of life in their hometowns.

J-Serve Pittsburgh this year occurred on Sunday, March 11, and had a total turnout of 327 teens, which kept up the high numbers from last year. The event had more than 24 volunteer sites, so the teens could participate in the service project most meaningful for them.

Sites ranged from volunteering with animals and learning about adoption at Animal Friends, to learning about food insecurity nationally and in the Jewish community at the Squirrel Hill Food Pantry. The teens that participated this year engaged in a wide range of experiences and hopefully will continue their work into the future. The JCC in Squirrel Hill has been the home site for J-Serve for the past 10 years, and was joined by many other organizations that partnered, all to make the day the best it could be. 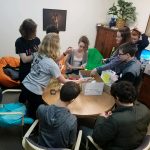 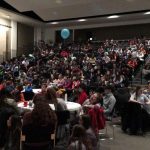 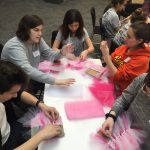 The theme for this year’s J-Serve, decided by the co-chairs and teen led steering
committee, was “Make Your Mark,” a slogan meant to extend beyond the day itself and allow for teens to engage in ongoing projects throughout the community. When someone “makes their mark” on a person, place, or thing, it can be a small, yet significant change to whatever is affected. Every teen involved in the planning of J-Serve 2018 wanted the day of service to symbolize the wonderful things that can come from volunteering, specifically that community involvement does not have to end after the event itself.

After the morning introductions and remarks to get the teens excited for the day, each group headed out to their respective sites around the Pittsburgh area, some being within walking distance of the JCC such as Weinberg Terrace, a personal care community mainly aiding elderly residents of Pittsburgh, and others being further out, such as Angel’s Place in the North Side, which assists young parents in raising their children.

An example of what the teens were able to engage in during the morning of J-Serve was at Animal Friends, an animal shelter on Camp Horne Road in Pittsburgh. At this site, the teens and their peer leaders joined in both meeting with and observing the animals in the shelter, along with meeting volunteers that come daily to work to give the animals a nice home. While the general appeal of meeting and playing with animals was enticing, the coordinators at the site were able to enhance the day with their knowledge about the animals that the teens interacted with. They gave personal anecdotes of why they got involved and, most importantly, pushed for the teens to continue making a positive impact by volunteering.

At Family House Neville, for example, the teens assembled a lunch of lasagna and salad for the residents, and were touched when they were approached and thanked for their work. Each one of the J-Serve teens left the site that day feeling both empowered and aware of the effects that their time volunteering had on the community.

J-Serve is an important community event, serving to educate and inspire the next generations of teens to become more aware of social justice issues and become involved. Any act of tikkun olam, repairing the world, starts within a person’s own community, ultimately expanding into larger efforts and bettering the global society each teen is a part of. This year, J-Serve Pittsburgh was all about “Making Your Mark” on the community that the 327 teens represent, ideally inspiring increased volunteer excitement

It's a special time of year, a time to "Start Fresh." To help you prepare, we put together an infographic -- kind of a "fresh" take with interesting ...
read more

Holidays, especially Jewish Holidays, are not the best time to enforce a weight loss diet. Take Shavuot, which this year begins on the eve of Satur...
read more

7 Things for Kids and Families to do at the JCC

To be honest, there are many, many more things for kids of all ages to do at the JCC! We just wanted to highlight a few things you may not have known....
read more