Posted by JCC Pittsburgh on November 3, 2017

Faithful Responses to Strangers, Immigrants and Refugees: A Pittsburgh Conversation – Thursday, November 2, 2017, at the JCC

This event, hosted by the Center for Loving Kindness and Civic Engagement, brought together clergy, lay leaders and community members, and refugees and immigrants who shared their stories: 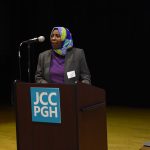 Eman, from Sudan, introduced herself to neighbors 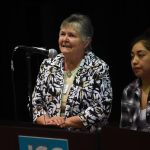 Sister Janice translates for Brandy, whose parents were deported and whose husband is seeking asylum 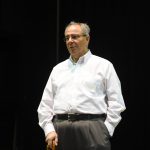 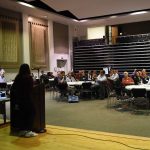 “When I first got here, people wouldn’t talk to me because I was Muslim. They said I was a terrorist. …We’re all human. Religion or race is not going to separate us.”

–Israa, a 16-year-old high school senior, who came two years ago to the United States with her mother from Iraq; her father and brother have been unable to join them and are still in Iraq.

“As human beings, if we reach out to each other, we can overcome differences and become friends.”

–Eman, who came from Sudan two years ago. When her new neighbors eyed her with suspicion, she decided to go door by door to meet them. She brought them hibiscus tea. Her neighbors became her friends.

“This country has become my country.”

–Brandy, who came to the U.S. from Mexico with her parents and brother about 11 years ago. Two years ago, police stopped her family and jailed all four for a month; her father and mother were deported. More recently, her husband was picked up with a friend in Beechview by ICE (Immigration and Customs Enforcement) agents who were looking for someone else. Her husband was imprisoned and has been released on $2,500 bond while he seeks asylum. Brandy spoke in Spanish, which was translated by Sister Janice Vanderneck, Director of Civic Engagement, Casa San Jose

Dr. David Saenz, PhD, EdM, told of having come here from Mexico, first as a child migrant worker, harvesting crops in the San Joaquin Valley of California and then following the crops to west Texas. He noted, “The complaint that we {immigrants} take the good jobs–if you look in the fields, you see only brown folk.”

He was deported 11 times in his family’s efforts seeking asylum to escape an authoritarian government. When he finally was able to settle here as a youth, he received a good education and has been here for 40 years.

He told of a recent, very disturbing experience. At a Costco, a large man stalked him and finally confronted him, demanding to know where the doctor is from. Dr. Saenz answered “Wexford,” but the man pressured him for where he “really is from,” and when the doctor told him Latin America, the man became irate, railing against immigrants, Muslims, liberals.

As Dr. Saenz struggled to get away, the man ranted, “We’re coming after you. If you try to impeach Trump, there will be war.”

The current national conversation about immigrants and refugees demands that we engage in faith-guided conversations with each other across our denominations.

Beginning with scripture, the Hebrew Bible instructs us, “When a stranger resides with you in your land, you shall not wrong him. The stranger who resides with you shall be to you as one of your citizens; you shall love him as yourself, for you were strangers in the land of Egypt: I Adonai am your God.” (Leviticus 19:33-34) The Christian Bible teaches “Do not neglect to show hospitality to strangers, for thereby some have entertained angels unawares.” (Hebrews 13:2) The Koran guides us, “And do good unto your parents, and near of kin, and unto orphans, and the needy, and the neighbor from among your own people, and the neighbor who is a stranger, and the friend by your side, and the wayfarer, and those whom you rightfully possess. Verily, God does not love any of those who, full of self-conceit, act in a boastful manner…” (An-Nisa 4:36). Other scriptures from assorted faith traditions share similar messages. We believe that we should be in conversation around these themes.

“We fear the ‘other’ because we fear our own inadequacy.”
–Rabbi Seth Adelson, Beth Shalom Congregation

What to help? Here is a list of community resources:

Read the Pittsburgh-Post-Gazette article about the event

Learn more about the Center for Loving Kindness and Civic Engagement