Home » Blog » Children, Teens, & Family » I voted as a proud American Jewish citizen. Will you?

I voted as a proud American Jewish citizen. Will you?

I live in Pennsylvania, where things matter this year in presidential politics, and I already voted through absentee ballot because 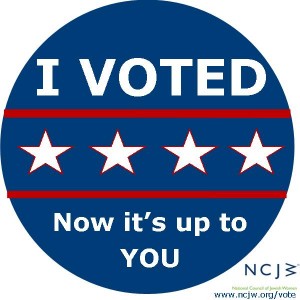 my schedule won’t allow me to vote in person.

Sitting on my family room couch as I looked at the ballot, I took into consideration my shared identity as an equally proud American and Jew, as I cast my vote.  I want to share with you ‘how’ I voted, not ‘for whom’ I voted.

There are certain verses that were placed as foundation stones of the Jew I aspire to be.  Growing up in Temple Emanu-el of Lynbrook, NY, under the leadership of Rabbi Harold Saperstein z’l, I learned that “You (plural) shall be holy, for I, Adonai your God, am holy” (Leviticus 19) serves as the foundation for the sacred community in which I grew up and towards which I lovingly labor to build on a daily basis with hundreds of members of our community.  My professors at the Hebrew Union College – Jewish Institute of Religion in Jerusalem and New York taught me that Rabbi Tarfon’s admonition “You don’t have to finish the work, but neither can you turn away from it” (Pirke Avot) would serve as a rabbinic mantra for my lifelong study, pastoral work and social justice advocacy.  No matter where my desk has been throughout the years, I have always hung over my desk a calligraphic piece of art that my wife Barbara had commissioned by a friend.  It is another quote from Pirke Avot, this time from Rabbi Chananya, “When two sit together and words of Torah pass between them, the Shechinah (Divine Indwelling Presence) rests upon them.”  All of these verses guide me in my aspirations to be the Jew I am yet to be.

There are certain verses that were placed as foundation stones of the American Citizen I aspire to be.  Thomas Jefferson declared in 1776, “We hold these truths to be self-evident, that all men are created equal, that they are endowed by their Creator with certain unalienable Rights, that among these are Life, Liberty and the pursuit of Happiness.”  In 1789, our political leaders constituted, “We the People of the United States, in order to form a more perfect Union, establish Justice, insure domestic tranquility, provide for the common defense, promote the general Welfare, and secure the blessings of liberty to ourselves and our posterity, do ordain and establish this Constitution for the United States of America.”  It was in that same year that they affirmed our basic rights beginning with, “Congress shall make no law respecting an establishment of religion, or prohibiting the free exercise thereof; or abridging the freedom of speech, or of the press; or the right of the people peaceably to assemble, and to petition the government for a redress of grievances.”  All of these verses guide me in my aspirations to be the American Citizen I am yet to be.

I am quite resolute about these two foundations. This is what I know.  We are commanded to strive to build a sacred community understanding that we might not finish the work and that God dwells between us when we speak sacred words.  All of us across the religious and racial spectrum (as we have come to better understand than did our founding fathers) are created in the image of God in order to build a more perfect Union without any one religion becoming the established religion of our country.  I read in these six verses three themes: we are all in this together, we aspire to transform the world, and, the plurality of our religious experience invites God to dwell among us.

This is the hallmark of the Prophetic mandate to repair the world according to the sacred values of the People of Israel as expressed throughout the course of world history.  While it is not a partisan mandate, it is a mandate to apply Jewish wisdom in the American public square without mandating a state religion.  Those who argue, “Others do that in their fundamentalism, that’s not what Jews do” are missing the mark.  Those who argue, “Let’s just apply them in the Jewish community and not in the world at large” fail to understand that the hole underneath the seat of my neighbor’s chair on our boat impacts me as much as it does her.  When our society fails one of its members, all of us fail by losing the potential good that person could have done by being a leader in this generation or the next.  Quite simply put, the teen I do not know who fails out of high school could have been the doctor who will cure cancer during my generation’s later years.

I cast my vote for these values.  I know others will read these words, verses and sentiments, and vote differently than did I.  That’s ok.

Just vote in a thoughtful way… and be proud of it.

When giving consideration to how we talk about anti-racism in early learning, there is an overwhelming agreed upon approach: Talk about it all year lo...
read more