Posted by Melissa Hiller, Director of the American Jewish Museum on February 15, 2016

I recently visited the studio of artist Marcel Walker, one of the illustrators behind Chutz-Pow: Superheroes of the Holocaust. Chutz-Pow is a graphic novel series developed by the Holocaust Center that focuses on civilians during the Holocaust who resisted Nazi ideology and risked their safety by coming to the aid of victims.

Marcel and I had just met at the Greater Pittsburgh Arts Council Annual Meeting, and we promised to schedule a proper meeting. A studio visit is art world parlance for curators and artists who meet in an artist’s workspace to look at work, connect, conspire, network, share, brainstorm, invent and scheme.

The comics genre is a rhythmic dance between literary and visual imagery, and I have a deep respect for it as both an expressive and educational medium. I was grateful for Marcel’s generosity to let me in on his ideas and artmaking processes, yet intimated that he’d discover his well of knowledge about comics runs much deeper than mine. It turns out that Marcel has been working on a new issue of Chutz-Pow, and as soon as he put some loose drawings in my hands we found ourselves talking with ease about history and art, and scheming like old friends. 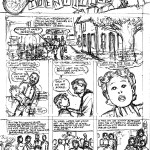 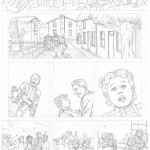 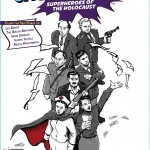 Marcel described the mechanics of making a comics image as one that requires several stages and, often, a few people. The drawing is loose and sketchy as the visual artist is shaping ideas, and there is plenty of space for the give-and-take between the artist and the person working on the story and lettering. The comic comes together over the course of a few drafts as the artists work through mechanical and conceptual issues.  Reinforcing why it’s accurate to interchange reading for looking at comics, the connective tissue between word and image exists from the very beginning of the process. Part of the lure and genius of comics, which Marcel’s images of Irena Sendler illustrate, is that the combination of the two expressive modes communicates in a way that neither genre can do individually.

Soon after our visit, Marcel announced that the Pittsburgh Symphony Orchestra selected his recently-completed illustration to promote their upcoming sensory-friendly concert.