Community and Philanthropy Key to The Wilson Group’s Success

The Wilson Group LLC functions as much more than a vendor of workflow solutions. With a commitment to Western Pennsylvania as a locally owned and operated company, its Golden Rule to treat customers the way we would want to be treated, and a record of giving back, this fast-growing young firm is truly a partner in the community. The Wilson Group also is a partner to the JCC–providing services and support through the JCC’s Big Night event.

The North Side based firm, which provides print, mailing and document management solutions, was started less than four years ago by Derrick Wilson, a Pittsburgh native who’d been in the business for 20 years.  Wilson had been vice president of new business development and sales at AMCOM/Xerox. He saw how the local companies were being absorbed by big manufacturers and how customer service was declining as operations were being streamlined and managed from outside the area. 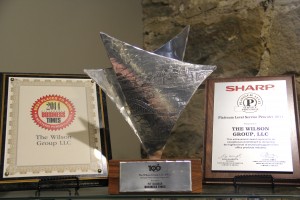 “The other businesses’ local presence just became a profit center,” Wilson says, “versus being a valuable asset to the community. So your money was not staying in the community.” He adds, “If local businesses don’t take care of each other and their own community, nobody will.”

Wilson launched his company in August 2012 with three employees. In two years, revenue grew a whopping 644%, to more than $5 million, catapulting it to No. 1 in the Pittsburgh Business Times 2015  list of the region’s fastest-growing companies. The Wilson Group now employs 40 and continues its fast growth; almost 100% of its business is based in Western Pennsylvania.

Philanthropy is a mantra with The Wilson Group. “I wanted to create a company that had the ability to give back,” he says. The company donates about $50,000 a year to local non-profits – including the JCC – through sponsorships.  Additionally, a portion of its revenue goes to the Kyle B. Wilson Scholarship Fund, a non-profit that honors the memory of Wilson’s son, who died suddenly at age 17 in 2008. The Fund provides scholarships to assist students and their families to pay for the many expenses related to a quality education.

“Our vision is to be more than a vendor. We want to partner with our customers.”

(In top photo, Wilson is on the right with one of his original employees, Vinnie Deleonibus.)