Home » Blog » Adults » An Illustrative List of the 613 Commandments.

The book “The 613” immediately caught my eye as I perused the shelves at Classic Lines, the cozy bookstore located on Forbes Avenue, adjacent to Commonplace Coffee.

Wondering whether there was a connection with the 613 Jewish Commandments, I asked the proprietor Dan Iddings if in fact there was one. That is exactly what the book is about, he told me.

Mr. Iddings says he is a lover of lists; it is one of the reasons the book stood out to him. In Judaism, there probably is not a more important list than the 613 Jewish Commandments. So I sat down on the sofa in Classic Lines and opened this book, full of curiosity. 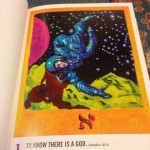 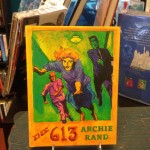 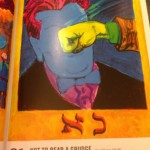 Immediately I learned that Mr. Rand is not a Jewish Scholar; he’s an artist who grew up Jewish. “I’m actually atheistic,” he says. The book follows a simple template, similar to a comic book: Starting from the top of the page, there’s an illustration rendered by Mr. Rand, followed by a Jewish numeral and the corresponding Jewish Commandment.

The art is beautiful, self-reflective and thought-provoking. The juxtaposition between the art and the Jewish Commandment challenges the reader; the translation between image and word is thought-provoking. Given the multiple interpretations inherent in Mr. Rand’s works, the book prompts colorful dialogue amongst its readers, including Mr. Iddings and me.

In the introduction, Mr. Rand shares the influences including artists (Warhol and Hockney), Jewish culture (Blazing Saddles and Kafka) and music (Charles Mingus) that inspire his work. Throughout the book, these influences blend together beautifully. I enjoyed reading about Mr. Rand’s life in his own words. He is quite the writer and storyteller. He primes the reader for a unique exploration of Jewish doctrine.

Through a New York Times article, I learned that these illustrations are part of a collection of large-canvas paintings rendered by Mr. Rand. 613 Paintings, a Tour de Force.

Although Judaism is a theme of “The 613,”  it does not dominate the book experience. While the Jewish Commandments are symbolized by the uniform fringes found on the Taleet, Mr. Rand’s book offers a new channel, expanding our notion of, and our way of thinking about, these “Laws,” both literally and figuratively.

Wisit Classic Lines in Squirrel Hill and grab a copy. It will get you thinking both inside and outside the book.

Can you avoid stress?

Stress is definitely a fact of life for all of us lately and for now, there is no end in sight. We may not be able to do anything about the source of ...
read more

We are still dreaming. Let's ensure every person is counted

"I have a dream that my four little children will one day live in a nation where they will not be judged by the color of their skin bu...
read more

Behavior experts say that it takes about 1 month to form new habits, and many people try to create (or break) habits at the start of each year. With t...
read more

I distinctly remember two phone calls my wife and I received shortly before 10 a.m. that day. “Are you in shul? The street is blocked by police cars...
read more