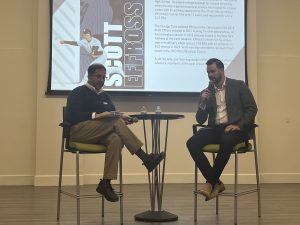 Having a space to openly talk about all things baseball, his Jewish identity, and mental health is a top priority for New York Yankees Pitcher, Scott Effross.

Effross and his wife Brittany have chosen Pittsburgh as their home in the off season because they fell in love with its charm after she attended Duquesne University. Being a native of Twinsburg, Ohio, also meant the two would be close to their families.

Effross began working with the JCC of Greater Pittsburgh late last year; he wanted to be involved with his local Jewish community during the baseball off-season. He and his father visited the JCC and helped volunteers with the AgeWell program serve the annual Chanukah lunch. He also visited with some of our seniors, teens and other members during his visit.

On Monday, January 23 the JCC, Team Pittsburgh Maccabi, and The Second Floor hosted an evening to allow our community to get to know Scott and ask him questions about his experience in the MLB and beyond.

“I’m really excited to be a part of the community and work with the JCC and I’m very fortunate to have that,” Effross said. “I think for me being Jewish is always having a structure and I think whether it’s you go to synagogue every week or don’t or go to family dinners every week. Because of baseball I’m not always able to keep that up but it’s always something I can fall back on.”

Effross expressed interest in hosting the event to connect with local Jewish teens and help inspire them to be their true selves. He worked with the JCC Second Floor, a gathering place for teens that provides an open and safe space for teenagers to spend time with friends, play games, and take part in community projects and activities.

During the event Monday, Effross took time to show the audience a deep breathing technique he uses when he feels under pressure or anxious. 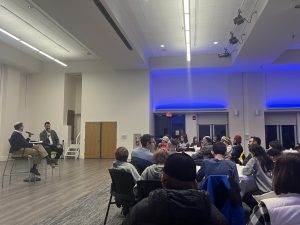 “I think for me when I first started meditating and getting into the world of mental health I always kind of had this big scary thought of meditation where you have to be quiet for an hour but really just the act of meditation is focusing and taking conscious breaths, so that’s something I do all the time whether it’s during the off season or during the game, just taking one kind of deep breath to focus and reset.”

Scott is also donating some very special experiences to the JCC’s Big Night Auction which takes place March 4. The auction will go live about two weeks prior to the event. Learn more about Big Night here.

The JCC, Team Pittsburgh Maccabi, and The Second Floor can’t wait to continue working with Scott on future projects down the road when he is home in Pittsburgh.

When giving consideration to how we talk about anti-racism in early learning, there is an overwhelming agreed upon approach: Talk about it all year lo...
read more