Chat with us, powered by LiveChat
Donate
Emily Newman and the New Chelyuskinites 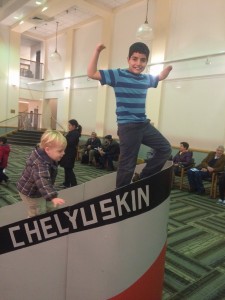 Participants from different generations worked together with Newman to represent the expedition, its shipwreck, what it took for people to survive, the expedition’s rescue and their ceremonial decoration. The exhibition includes video and print documentation of participants recreating various stages of the expedition and a small-scale model of the Chelyuskin just before its demise. Built for children to climb and play on, the ship’s model aims to prompt the JCC’s Russian-American community to relate childhood stories and talk more about Russia and the Soviet Union with AJM visitors.

While a disastrous expedition that occurred 80 years ago in the Arctic Sea might seem a remote topic for consideration today, the launch of the Chelyuskin was an historic undertaking. It signaled noteworthy scientific achievements and beckoned toward unprecedented commercial opportunities. Although technically a failure, the expedition’s tenacity and successful rescue shocked the world. Strangely, it was victory of sorts for communism, which was claimed to have been the secret explaining their survival.

The New Chelyuskinites creates a platform for current-day Russians, both here and abroad, to share memories from the Soviet era. Based on two years of collaboration between Newman and participants from Pittsburgh’s Russian community, and one year working in St. Petersburg, Russia, the project intertwines individual voices with broader truths about this period in world history.

Holidays, especially Jewish Holidays, are not the best time to enforce a weight loss diet. Take Shavuot, which this year begins on the eve of Satur...
read more

Another Passover Recipe My husband's Grandma Cele often talked about making her Passover specialties for her sons - carrot candy and somethi...
read more

Make a Meal of Hamantaschen!

The menorah is perhaps one of the most widely recognized symbols of Jewish culture and is the centerpiece of the Chanukah celebration. But how much do...
read more
Go to Blog