Chat with us, powered by LiveChat
Donate
Archie Rand 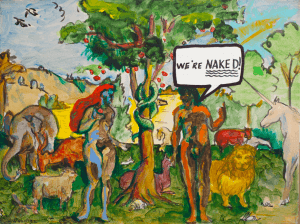 Artist and Jewish scholar Archie Rand depicts sixty stories from the Old Testament with seriousness, irreverence and skill. By incorporating an uncomplicated visual style and using contemporary vocabulary, he masterfully repositions ancient verses that address human history as well as the timeless struggles humans are doomed to repeat. Describing the connection between his biblical narratives and religious subject matter, art historian Samantha Baskind explains, “Crucially, Rand’s series is not didactic religious art akin to that made by Old Masters such as Raphael, but a post-modern artistic conception that also tries to universalize some of the Bible’s archetypal stories, delineating basic human emotions and issues such as power, faith, humility, sexuality, and family dynamics.”

Ultimately, Rand’s distinct mash-up of comics, pulpy-style drawing and biblical narrative generate a visually stunning and thoughtful body of work. Sixty Paintings from the Bible was curated by Samantha Baskind, professor of Art History at Cleveland State University, and is on view at The Galleries of CSU from September 1-October 18, 2016.

Artist biography: Archie Rand, born 1949, is an artist from Brooklyn, New York. Rand’s work as a painter and muralist is displayed around the world, including in the collections of the San Francisco Museum of Modern Art, the Art Institute of Chicago, the Victoria and Albert Museum in London, the Bibliothèque Nationale de France in Paris, and the Tel Aviv Museum of Art. There have been over 100 solo exhibitions of his work. He has published collaborative work with poets Robert Creeley, John Ashbery, Clark Coolidge, David Plante John Yau, David Lehman and Jim Cummins. He was awarded, among numerous honors, the Achievement Medal For Contributions to the Visual Arts by the National Foundation for Jewish Culture and he received the Guggenheim Foundation Fellowship. Formerly the Chair of the Department of Visual Arts at Columbia University he is currently the Presidential Professor of Art at Brooklyn College, CUNY. His home and studio are located in Brooklyn.

Stay Safe in the Sun!

As we head into the summer months, I hope you’ll keep your skin’s health - present and future - in mind. Use the following tips to stay safe in th...
read more

Passover is All About Time Travel

Each and every year when we pull our wine stained haggadot off of the shelf and place them on our beautifully set Passover tables, we have tw...
read more
Go to Blog